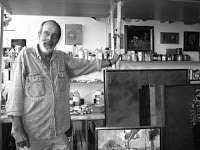 I have just received the very sad news that John Dobbs, the great American figurative painter, died early last month. I interviewed Mr. Dobbs in 2005 for my text-and-photo exhibit that inspired "The Last Bohemians." He was a true gentleman, and I heard from my friend Jack Dowling that the throat cancer that took Mr. Dobbs' voice did not stop him from painting. John Dobbs said many iconoclastic things in our interview, like he didn't believe in most fine-arts degree programs, and said so at his John Jay College interview in the early 1970s. He still got the job.

Today, the arts journalist Mona Molarsky posted a beautiful piece on John Dobbs today on examiner.com. Here it is:

John Barnes Dobbs, a determinedly figurative painter who launched his career in the 1950s against the prevailing winds of Abstract Expressionism, lived to see a time when Realism would coexist with Abstraction, Minimalism, Conceptual Art and a variety of other artistic movements. On August 9 Dobbs died at his home in New York’s Greenwich Village at the age of 80. 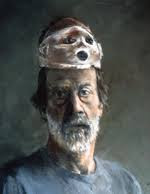 During a career that spanned more than half a century, Dobbs painted his own dusky vision of humanity: figures embedded—more often than not—in an alienating, modern landscape of city and suburb. The people on his canvases are often seen in the distance or from behind, as if departing. They ride up escalators, wait on subway platforms or pass through turnstiles. We glimpse their silhouettes through plate glass windows or in the glare of sun on concrete.

In his final works, Dobbs’ figures appear against flat backgrounds, iconic as the images on tarot cards: acrobats, boxers and contortionists, struggling against the physics of their own bodies and that of the universe. 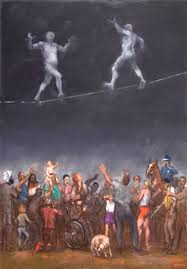 Dobbs had many solo shows at galleries, universities and museums. His work was exhibited at the Museum of Modern Art, the Whitney Museum, the American Academy of Arts and Letters, the Butler Institute of American Art in Ohio, and the Salon Populiste in Paris. Dobbs’ paintings are part of the permanent collections of the Hirshhorn Museum, Washington, DC; the Montclair Art Museum, Montclair, NJ; the Neuberger Museum, Purchase, NY; the Canton Museum of Art, Canton, OH and the Springfield Museum of Art, Springfield, MA.

From 1972 to 1996, he was a Professor of Art at John Jay College, City University of New York. He was a member of the National Academy, to which he was elected in 1976.

Born in 1931 in a small house by the Lackawanna Railroad in Nutley, New Jersey, where his grandfather had once worked as a railway express clerk, Dobbs grew up in a politically engaged family of artists, musicians and poets. Yet he credited the shining rails that ran past their little house with giving him his first lesson in one-point perspective. Although he studied with several painters during his twenties, he always referred to himself as a “self-taught” artist.

At 18, after graduating from high school, Dobbs hoisted a duffle bag onto his shoulder and hitchhiked cross-country. He worked at a variety of odd jobs before returning to the East Coast to study painting with Ben Shahn, Gregorio Prestopino and Jack Levine, who became his mentor and life-long friend.

In 1952 Dobbs was drafted into the Army and stationed in Germany. He brought along a sketchbook, which he filled with drawings of soldiers and post-war German life, later published in a chapbook, “Drawings of a Draftee” (1955).

Soyer’s canvas was a cri de coeur for 20th century American Realist painting. But, although he and Dobbs became close friends and artistic compatriots, their work developed along different directions. While Soyer devoted himself to painting from life, Dobbs worked from memory and imagination, employing both literal and symbolic imagery to invoke America’s collective preoccupations and dreams.
Those dreams, as Dobbs conceived them, can sometimes be terrifying. In Deodand #2, (1969), painted by Dobbs during the height of the protests against the war in Vietnam, a large revolver points straight at the viewer. Staring down the barrel of the gun is the shadowy face of a helmeted policeman. With its oversized revolver, gripped in huge hands, the work confronts us more directly and aggressively than news footage ever could. The artist is willing to let us squirm before this hyper-realistic nightmare of the American history from which we are still trying to awake.
“I’m not afraid to say I’ve made paintings that can be hard to live with,” Dobbs wrote near the end of his life, responding to often-heard comments that his work is both beautiful and disturbing.

Certainly we can trace Dobbs’ artistic lineage from Goya through George Grosz, those break-and-enter artists who brought fury into the drawing room and have never been entirely forgiven. As with those earlier, socially conscious painters, one senses that the demons that pursued Dobbs were as much personal as political. That’s one reason the sloppy labels “Realist” and “Social Realist” that have dogged him and his circle for decades don’t shed much light on the paintings.

In the unforgettable self-portrait White Mask (1999), Dobbs’ haunting gray eyes stare out of his long, bearded face. They are cool, appraising and unflinching. But instead of a cap on top of his balding head, the artist wears an African totem. It’s a large wooden mask, painted white, the color of death. And its coal-black eyes stare off into an otherworldly, steel-blue distance.
“I am your doppelgänger,” the ghostly second head seems to say, “and I come from a world that’s truer, deeper and more real.”


Dobbs is survived by his wife Anne, sons Michel and Nicolas, and his sister Louise DeCormier and her family. His work is represented by ACA Galleries in New York and George Krevsky Gallery in San Francisco.
Here is the link to the examiner.com website, where there is a slideshow of John Barnes Dobbs' work.
http://www.examiner.com/city-life-in-new-york/john-barnes-dobbs-american-painter-1931-2011

John was a dear friend since the early 1950s, and we are glad to see the appreciative memorial, however late. To qualify him as a "Bohemian," however, you'd have to group him together with Danny Brown, his partner in the "Drawing" project of the late 50s, and, above all, David Johnson, who was a poet rather than an artist, and who formed the center of the group in those early year of protest art.