The painter Saul Lishinsky died on February 9, 2012. Here is his obituary from the Tyson Fund, an art foundation named after his late girlfriend Florence Tyson.

The fascinating thing about Saul is that he rarely sold any of his work. When I interviewed him in 2005, he had 60 years worth of work, crammed in every space in his two-level live-work studio at Westbeth. There was only one chair, and  he urged me to take it. The Westbeth Gallery director referred to Saul's studio as "the Cave."

Saul's nephew had the studio cleaned out. The artwork was junked, but much of it wound up being sold in the Chelsea Flea Market. Some oil paintings sell for $400 or $500. Drawings of Saul's sell on Ebay for $10.

I found Saul to be an interesting, self-centered figure. His early paintings from the 1940s and 1950s were the most interesting part of his body of work.

The interview at the bottom of this obituary was cribbed from "The Last Bohemians." 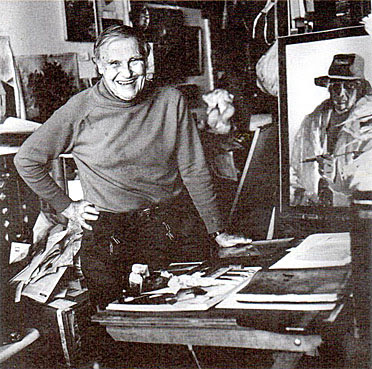 Saul Lishinsky was born in 1922, to Russian Jewish parents in Carbondale, Illinois. He was raised in the Bronx and lived in New York City as an artist for his entire life. After serving in WW II, Lishinsky returned to New York and began to paint. His work was fueled by the encouragement of his cousin, the noted WPA painter Abraham Lishinsky, and a personal passion for the work of Rembrandt and Cezanne.

Lishinsky had his first show at the 44th Street Gallery in 1946, and studied with Hans Hofmann in Provincetown, Massachusetts during the Summers of 1946-1948.  He attended the Art Students League in New York City, and would later have eight one-man shows throughout the1960s. He last exhibited at the Westbeth Gallery in 2006.

Lishinsky was a social activist and founded the Bronx Community Murals as a community project. In 1977 and 1979 Lishinsky and the community completed murals at the Westchester Square branch of the New York Public Library, in works entitled Celebration I and Celebration II, respectively. Murals by Lishinsky can still be seen throughout the greater New York City area.

Lishinsky exhibited his works extensively both at home and abroad, including solo shows in Lisbon, Denver and Connecticut, and group shows in New York City, Denver and New Jersey. In addition he published his drawings and poems in 1958 in a collection entitled The Tune of Calliope: Poems and Drawings of New York, and in 1973 in publications of the Soundview Throgs Neck Community Mental Health Center where he worked for many years as a recreational art therapist.
Lishinsky believed deeply in his work in art therapy; he published many articles in this field, and instructed professional artists and amateurs in the psychiatric treatment of patients through art therapy.

“The art program I conduct,” he wrote, “is based on my conviction that art is a wholesome, socially necessary form of work. As in other forms of work and play, consistency, persistence, and purposeful striving must be nourished.  The essential nature of art, however, gives genuine artistic work special pertinence to mental health.”

Lishinsky married Estelle Tambak, a painter, educator, and social activist, in 1954; they were divorced in 1974. His devoted life partner in later years was Florence Tyson, a world-renowned music therapist and a pioneer in the field of community-based creative arts therapy,

In 2004 Lishinsky established the Florence Tyson Fund for Creative Arts Therapies in memory of Florence Tyson, and to continue her work. Today the Tyson Fund continues to fund and set the bar for creative arts therapies.

In 2008 Lishinsky moved into a nursing home and his entire studio, filled with nearly seven decades of work, was sold. Lishinsky continued to work as an artist, drawing and sketching with the encouragement of artists and friends who visited him regularly.  At the same time, his work, now on the market, brought him recognition---and personal messages—from artists in the US, Germany, Russia, and around the world.

Saul Lishinsky was interviewed in his studio in 2005 and had this to say about his life as an artist:
“When I am asked, I say I am 39. I’m really 83. I have no plans to pass away. I’ve lived in Westbeth since 1974. That year, I got divorced. I had a little brownstone on Manhattan Avenue. The whole top floor was my studio.

I had a cousin, Abe Lishinsky, who was a WPA painter. He encouraged me. He said, “Draw whatever you see a lot.” I’ve done that all my life. . . .

People in New York City were struggling to make money. I was just satisfied with the money I was making part time so I could exist and keep painting. In order to get a teaching job, you had to have some shows. I had some shows. You had to have write-ups and a point of view. The point of view was cheapening, limiting the expression. You had to give it a name and the name was not enough. That’s what happens to artists. It is not a matter of talent. It is the struggle to get along, the doggedness, sticking to the most intense expression you can get. The struggle to get along and be recognized is what really deflates the spirit.

Gaining acceptability as an artist is mechanical. It is dead. To live, you have to sell your art, but merchandising is cheapening. Merchandising eliminates art that is unpleasant. Unpleasantness is part of life and it has to be shown with what is beautiful. I sell art when I can, but people don’t want to pay. There was this guy, a scenic designer for Balanchine. I made sketches of him. I started a painting of him. He wanted the painting and we agreed to $1000. I reworked the painting and a year passed. He said that he couldn’t afford a thousand dollars. He only wanted to pay $500. That is why I don’t sell.”

*Excerpts taken from:
The Last Lullaby: Poetry From the Holocaust
The Lost Art Salon http://www.lostartsalon.com/saullishinsky.html

Here is the original Tyson Fund link:
http://www.tysonfund.org/saul_lishinsky.html
Posted by Dylan Foley at 11:41 AM

Mr. Foley, I am an associate attorney of the counsel to the Public Administrator of the County of New York, fiduciary of Mr. Lishinsky's Estate. If you have any information about the names and addresses of Mr. Lishinsky's next-of-kin, I would be obliged if you shared it with me. I may be reached at kpeterson@dfrv-ny.com. Thanks for your help.