The great Barton Benes died on May 30, 2012, after a battle with  HIV and AIDS that lasted more than 25 years. I interviewed Barton for the first time 10 years ago. He and his apartment were a reporter's dream. Inside an 800-square-foot studio was crammed 40 years worth of work, including his devastating AIDS pieces, which were usually quite funny at the same time. Barton and his apartment became addictive. I met him when he was deep in the throes of making relics out of celebrity garbage. Like other friends of his, I would send him things I'd come across.
I had my wisdom teeth pulled and gave them to him, but he sheepishly admitted that many people gave him their teeth, so he'd thrown mine into a bin with all the others. We were just acquaintances, but as long as I visited him after 2 p.m. (he worked all night), he would give me a shot of vanilla-flavored vodka and we'd talk.
Barton Benes was a great provocateur. As the article below indicates, his whole apartment is being recreated in a museum in Grand forks, north Dakota. Barton told me that perpetual twinkle in his eye that he was going to be cremated and put in a pillow in front of the television in his apartment's final resting place.

An Enclave of Artists, Reluctant to Leave 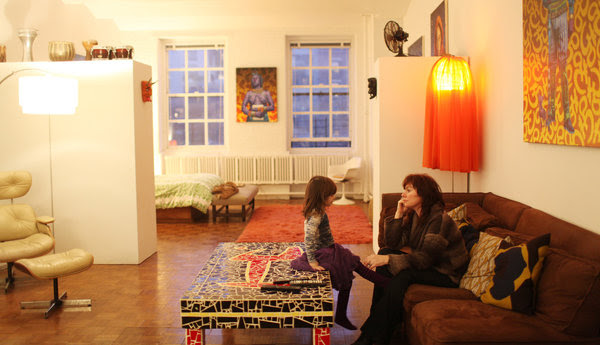 (Kirsten Luce for The New York Times)
Reef Hall, 5, and her mother, Samantha Hall, in the Westbeth complex, the first federally subsidized artists' colony in the country.

“Barton, it’s me; poke your head out the door,” Lucille Rhodes said into her cellphone as she strolled down the antiseptic white corridor linking the artists’ residences known as Westbeth.

Moments later, Barton Lidice Benes peeked out. Wearing boxer shorts and a T-shirt, he waved two strangers inside as if they were old friends. The smile on his face made it appear as if the oxygen tubes running into his nostrils were some kind of secret and wonderful prank.

The door opened onto a strange alternate universe of taxidermied animals; found objects, which he calls relics; and collages. Money from around the world has been torn up, twisted and pasted into replicas of plants and flowers.

A pendulous hourglass holds the mingled ashes of two lovers. The head of a bull from Pamplona hangs on the wall. The long-necked head of a giraffe, killed by a hunter in Kenya, pokes above the clutter. “Everyone thought I killed it,” Mr. Benes said. “I said, I don’t kill anything, just cockroaches and mice. But if they’re killed already, I like them.”

This is Westbeth, one of New York City’s newest landmarks, on the far west side of the Village, where old-timers like Mr. Benes, who just turned 69, see the ghosts of artists past, like Diane Arbus, photographer of the poignantly twisted. Through his peephole, he saw her body being wheeled out of her apartment down the hall after she committed suicide.

“I work all night, so I was awake,” Mr. Benes, one of the original Westbeth residents from 1970, said. “It’d be something she would take a picture of, the way they dragged her body out of here.”

His generation of artists were so grateful for cheap rent and a place to live and work that they thwarted Westbeth’s original vision of being an incubator for artists for five years or so, until they were ready to fly the nest. In New York, with its perpetually overheated real estate market, Westbeth was Never Never Land, and like Peter Pan, they never left. Only unlike Peter Pan, they grew old, and many are now in their 70s and 80s.

Westbeth, a jumble of five industrial buildings and once the home of Bell Laboratories, opened 41 years ago as the first and largest federally subsidized artists’ colony in the United States. A young architect named Richard Meier remodeled the complex on Bethune Street, not far from where he would build three controversial glass towers. The city’s landmarks commission gave landmark status to the complex on Oct. 25. Westbeth was listed on the National Register of Historic Places in 2009. The landmark status means the buildings cannot be torn down or altered without the commission’s approval, and will make it more difficult for a developer to make a play for any of the buildings.
The residents of the 383 apartment-studios have seen the neighborhood go from a neglected and crime-ridden industrial backwater to what Mr. Benes calls Hollywood on the Hudson, an affluent enclave populated by stars like Hilary Swank.

The lobby is filled with tottering elderly people whose wild hair, mismatched clothes and keen gazes bespeak not madness or age but rather a lifetime of challenging convention. A grant pays for a social worker to come in four days a week. “People in this neighborhood think this is an old age home,” Mr. Benes said, chuckling.

George Cominskie, the head of the tenants’ organization, estimates that 40 percent to 50 percent of the original tenants still live at Westbeth. Some artists have handed their apartments down to children and grandchildren. The actor Vin Diesel still comes to visit his parents.

The waiting list has been closed for five years, and vacancies are rare. Tenants have to be recommended by people in their creative field — the arts, acting, writing — although subletting to nonartists has been known to occur.

Despite the aging population, the halls still ring with the sounds of children playing.

Stephen Hall, a painter who moved in 15 years ago and counts as young at 57, and his wife, Samantha, 45, are raising their daughter, Reef, 5, in an alcove off the studio where he paints. His large canvases in vividly saturated acrylic show cultural conflict and homogenization: a Japanese woman who, on closer examination, wears a pattern of Eames chairs in her kimono and is clutching McDonald’s fries; a Native American against a patterned ground that turns out to consist of silhouettes of Windex bottles.
“I wouldn’t be at this stage now if it wasn’t for Westbeth,” said Mr. Hall, whose application to Westbeth was recommended by the Pop artist Jim Dine.

“The only way essentially an apartment vacates is because someone died,” Mr. Hall said. “It is terrible to say, but I have smelled decomposing bodies before anybody knew they were dead.”
Now there are five families with children under 9 in his wing of the third floor where the Hall family lives. The children wander the halls in pajamas and drop in on their friends for Saturday morning pancakes.

They grow up surrounded by cultural events like last week’s PEN-sponsored literary reading, in which the public traipsed through various apartments, listening to authors read their work. Asked if he had apartment envy, one visiting writer, Lev Grossman, said, “I’m trying to keep it under control.” His neighborhood in Clinton Hill, Brooklyn, is filled with artists, but, he said, “we hide in our houses, so it’s not like this.”

When Mr. Benes threw open his door for his birthday party last week, Ms. Rhodes, a documentary filmmaker whose application to Westbeth was recommended by Norman Mailer (she edited Mailer’s film "Maidstone"), brought the vodka.

The North Dakota Museum of Art endeared itself to Mr. Benes by displaying his Molotov cocktail of his H.I.V.-contaminated blood. So he has willed it the contents of his Westbeth apartment, which will be reconstituted amid the sunflowers and cornfields of Grand Forks, as a permanent exhibit.
Much has changed in the streets outside Westbeth. D’Agostino’s, Mr. Benes says, is “like Tiffany’s,” and all the divey Chinese restaurants are gone. But Westbeth goes on.

When he moved in, his rent was $99 a month. Now it is a still delightfully affordable $640. “I came here when I was young and needed cheap living,” Mr. Benes said, "and now I’m old and still need cheap living."
Posted by Dylan Foley at 6:47 PM