JUDITH MALINA--ACTRESS, DIRECTOR AND FOUNDER OF THE LIVING THEATRE, 86 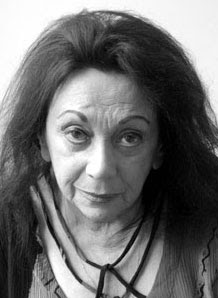 In the late 1940s, Judith Malina and her late husband Julian Beck founded the Living Theatre. The influential, avant garde company toured the world, put nudity on the stage and advocated for world peace. Malina herself was arrested in more than 12 different countries, including Sweden. Malina and her husband, the director and actor Hanon Reznikov, set up a new theater on the Lower East Side in 2007. Hanon died in 2008. After some great theater projects and serious financial problems, the new theater closed in 2013.

There has always been an avant garde, there has always been a bohemia. I don’t think 20 years pass, whether it is Athens, Vienna or Paris, various places where there hasn’t been a hot place. I don’t think there is a big city in the world that hasn’t always had a bohemia. We are everywhere, we are eternal and infinite. As long as there are human beings, there will be someone finding where the next step is. The people who are curious about that represent the avant garde. The people who are curious about how to live in the world and not be prisoners. of its customs are the bohemians. We’ve always been around.

The 1940s and ‘50s was a germination period. What was about to happen was the sixties. In the 1950s, we were consciously interested in being an artistic community. This is missing for me today. There are a lot of great things happening in New York, but there isn’t a conscious artistic community. Artists were interested in each others’ work, respectful of each others’ work. The solidarity was strong because we were all concerned with peace. We were interested in each others’ activities, whether it was different disciplines, Gestalt therapy, spiritual movements and physical experimentations of the body, or various kinds of sexual arrangements.

The ‘40s and ‘50s was a time of breaking limits, opening up, finding your anarchistic, libertarian, open ways of doing anything--art, life, politics.

I’ve run out of money everyday of my life. We always struggled financially. Money gets in the way. I try to raise enough money to keep the theater going. We were always interested in how far we could advance the ideas that could lead to the beautiful, nonviolent revolution. Nothing else interested us.

What I am searching for is the next thing. I am waiting for you to tell me what are the new styles of dance, painting and Theatre, the new kinds of poetry. I’m waiting for the beautiful, nonviolent anarchist revolution. I’m having trouble gathering critical mass.
Posted by Dylan Foley at 3:41 PM No comments:

After a horrible dress rehearsal of the Brecht play He Who Says Yes and He Who Says No, the founders of the Living Theatre Julian Beck and Judith Malina went to the San Remo. A ragged drunk approached their table and to a startled Beck said, “I’m Max Bodenheim, the idiotic poet,” as he tried to offer up a poem for drinks.

The playwright and Hollywood screenwriter Ben Hecht, author of The Front Page and an old friend of Bodenheim’s from the 1920s, once described the poet as “a gaunt, shabby looking man...the albino face with the look of frostbite on the skin...a jack o’lantern smile distends his mouth, exposing a number of missing teeth.”

Bodenheim was mocked by Time magazine in February 1952 in an article titled “The Literary Life” for being arrested for sleeping in the subway with seven other vagrants. The magazine quoted Bodenheim bashing Greenwich Village, saying, “The Village used to have the spirit of Bohemia, gaiety, sadness, beauty, poetry. Now it’s just a geographical location.” As one of Bodenheim’s biographers noted, the old bohemian poet sometimes stood on Village street corners with a sign saying “I am blind.”

At the Remo after his arrest, Bodenheim confided in Judith Malina that he was going to sue Time. “A recent benefit for him [was] given by some Villagers to put him in some possession of some money,” wrote Malina in her diaries, “so he bought me beer, and gin for himself, and quickly became incomprehensible.”

According to Allen Ginsberg, Bodenheim literally pissed away his own career as a poet. Ginsberg’s father Louis was a small-time poet from New Jersey, and was present on the night the 1930s when Bodenheim was thrown out of the Academy of American Poets in Manhattan for relieving himself in front of the assembled poets.

Other dregs of the earlier bohemian eras haunted the Village. The homeless Harvard graduate and failed historian Joe Gould would hit the Remo and the Minetta Tavern to cadge money for his Oral History of the World. The fragments of Joe Gould’s oral history that were found after his death turned out to be horrible. Izzy Young, the man who ran the Folklore Center, a Village store where you could buy sandals or bongo drums, and make the vital connections to join the surging folk scene on MacDougal Street, discovered a cache of the books. “They stank,” said the former Village Voice columnist Howard Smith of Gould’s notebooks. “Izzy found tons of notebooks. This is what they said: ‘Overheard woman in the next booth ordering shrimp marinara. Her boyfriend said, ‘Want another cigarette?’ She said ‘No.’ People in the booth in front of me ordered another bottle of wine. Can’t make out what they are talking about.’” John Tytell, an early biographer of the Living Theatre and the Beats, said that Gould’s indiscriminate writing down of everything he heard could be called “the original tape recorder.” Seymour Krim noted that both Bodenheim and Gould “were clowns in a certain way. I mean bitter clowns to make a buck.”

Bodenheim and Gould couldn’t stand each other. In one battle, Gould told Bodenheim “You are slipping. You were a better poet 25 years ago than you are now, and you weren’t any good then.” Another time, Gould told Bodenheim that “You are an artsy-crafty poet...a niminy-piminy poet...And you are frightfully uneducated.” Despite being perpetually homeless, Gould was still a Harvard man (Class of 1911). Bodenheim slashed back at Gould, mocking his nearly nonexistent Oral History of the World, and the numerous notebooks full of rewrites about the death of his father, with the withering line, “Don’t tell me you are still trying to bury your father.”

Bodenheim and Gould’s vicious fights were Village events, often held at Goody’s, a bar of West 10th Street and 6th Avenue, named after the owner, a man named Goodman. The bar was described by Joseph Mitchell, as being, “Like most of the barrooms on Sixth Avenue in the Village, it was long and narrow and murky, a blind tunnel of place, a burrow, a bat’s cave, a bear’s den. I learned later that many of the men and women who frequent it had been bohemians in the early days of the Village and had been renowned for their rollicking exploits and now were middle-aged or elderly and in advanced stages of alcoholism.” In this bar of bohemian wrecks, the owner used to give food and drink to the two down-and-out writers so they would fight for the entertainment of the customers.

When the Remo and other bars had closed, Bodenheim would wander back to the grim Waldorf Cafeteria on Eighth Street, drinking a dinner of tomato soup made out of ketchup and “would sit like a cadaver under the sickly, yellow-green light that gave the Waldorf its other name, ‘the Waxworks.’”

Bodenheim, who was often homeless, was killed under gruesome circumstances in February 1954. The poet and his third wife Ruth Fagin, who the writer Milton Klonsky said Bodenheim occasionally pimped out, accepted a place to stay on Third Avenue from a deranged dishwasher named Max Weinstein. After Bodenheim went to bed, the dishwasher proceeded to either rape or have consensual sex with Bodenheim’s wife. When Bodenheim awoke, Weinstein shot him with a rifle and stabbed the screaming Fagin to death.
Posted by Dylan Foley at 9:19 PM No comments: