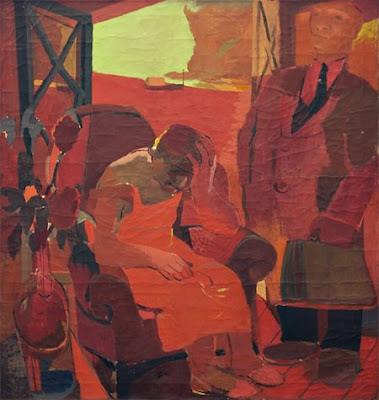 Early in 2008, Saul Lishinsky was too infirm to live by himself. He was put in a nursing home and his nephew had his live/work studio cleaned out, getting rid of thousands of drawings and paintings. The paintings wound up at the Chelsea flea market and have been purchased by strangers. There has been some buzz on the Internet about him.

Saul Lishinsky’s 800-square-foot studio is crammed with 60 years worth of painting, sculptures and a printing press. Lishinsky offers his only chair, a plastic folding one to the interviewer, saying that he would prefer to stand.

Saul Lishinsky was raised in the Bronx. After serving during World War II, he returned to New York and started painting.

When I am asked, I say I am 39. I’m really 83. I have no plans to pass away. I’ve lived in Westbeth since 1974. That year, I got divorced. I had a little brownstone on Manhattan Avenue. The whole top floor was my studio.

I had a cousin, Abe Lishinsky, who was a WPA painter. He encouraged me. He said, “Draw whatever you see a lot.” I’ve done that all my life. He said, “Don’t go to the National Academy.” He did that and he felt it crippled him as a painter.

I go for particular artists. Very early, I saw Rembrandt at the Metropolitan. I looked up art books and the way he used to draw. That was my studying, not art school. I’m loaded with art books. Besides Rembrandt, Papa Cezanne was important to me. Cezanne had a fierceness to his work. Early in Cezanne’s career, he did a painting on a murder. I identified with that fierceness. I was struggling what I was doing with color. Color has a structure. The feeling of it is very important.

People in New York City were struggling to make money. I was just satisfied with the money I was making part time so I could exist and keep painting. In order to get a teaching job, you had to have some shows. I had some shows. You had to have write ups and a point of view. The point of view was cheapening, limiting the expression. You had to give it a name and the name was not enough. That’s what happens to artists. It is not a matter of talent. It is the struggle to get along, the doggedness, sticking to the most intense expression you can get. The struggle to get along and be recognized is what really deflates the spirit.

Gaining acceptability as an artist is mechanical. It is dead. To live, you have to sell your art, but merchandising is cheapening. Merchandising eliminates art that is unpleasant. Unpleasantness is part of life and it has to be shown with what is beautiful. I sell art when I can, but people don’t want to pay. There was this guy, a scenic designer for Balanchine. I made sketches of him. I started a painting of him. He wanted the painting and we agreed to $1000. I reworked the painting and a year passed. He said that he couldn’t afford a thousand dollars. He only wanted to pay $500. That is why I don’t sell.