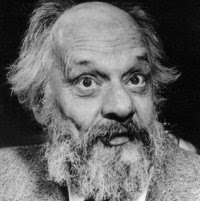 Less than a year after the Harvard historian and writer Jill Lepore published an epic New Yorker article on the Greenwich Village eccentric and writer Joe Gould and his relationship with the New Yorker writer Joseph Mitchell, she published a book version of the piece called Joe Gould’s Teeth. Getting the slim volume in the mail from the Knopf publicist, I thought it was going to be a lightly buffed up version of the article in book form.

I could not have been more wrong. In Joe Gould’s Teeth, Lepore has written an engrossing portrait of the “last bohemian” writer Joe Gould, who came to New York from the Boston suburbs in the teens of the last century, was part of the counterculture of 1920’s Greenwich Village, then stayed for the next 30 years, as a quirky leftover, cadging money for his Oral History of the World.

Ransacking university libraries and archives around the country, Lepore goes through Joe Gould’s extensive paper trail, letters asking for money, letters showing that he was a willing participant in the eugenics movement of the teens and ‘20’s, letters attacking various writers in New York.

Lepore turns her formidable academic mind to the story of Joe Gould and comes up with a meticulously researched, fluid story of Gould’s turbulent life in New York and Joe Mitchell’s two very different profiles of Gould.

In 1942, Mitchell published his New Yorker profile “Professor Sea Gull,” which created an endearing portrait of a semi-homeless intellectual trying to create a massive oral history, recording the speech of the common man and woman, in all their banal glory. Mitchell’s piece made Gould a Village celebrity. He was given a free meal at the Minetta Tavern (as long as he ordered a cheap pasta) so he could write in the window, showing off a real bohemian to the tourists who came down.

Gould lived off handouts from friends and acquaintances. In Mitchell’s 1942 profile, Gould claimed that he could speak to seagulls, and he lived off a tomato soup he made from hot water and tomato ketchup stolen from diner counters.  He aggressively solicited donations to write this history.

In “Professor Sea Gull,” Mitchell recounts that the proprietor of a 6th Avenue bar named Goody’s would give out free drinks to Gould and the down-and-out poet Maxwell Bodenheim, who hated each other. The two fallen literatis would rip into each other with zestful viciousness for the entertainment of Goody’s patrons.

Mitchell, a failed novelist, whitewashed the story of Joe Gould in the 1942 profile, covering up the fact that he had been arrested numerous times for groping women on the street and had been saved at one point from commitment to a mental hospital by the famed poets e.e. cummings and Ezra Pound, who wrote letters in his support. (Both poets were well-known anti-Semites.)

Lepore also details Joe Gould’s hounding of Augusta Savage, a sculptor from the South who had become one of the major movers of the Harlem Renaissance in the 1920’s. Gould pursued her so relentlessly, implied Lepore, that she left Harlem and became a subsistence farmer near Woodstock, N.Y. Or as Lepore also notes, Savage may have fled Manhattan because she may have been unmasked as an FBI informant, spying on her fellow African-American artists. 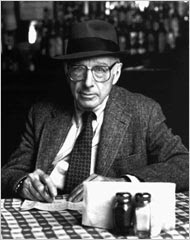 (Joseph Mitchell, 1989)
Every young aspiring journalist should read the work of Joseph Mitchell, including his titanic profiles in McSorley’s Wonderful Saloon, like “The Old House at Home” (the great McSorley’s essay) and “King of the Gypsies.” Raised on a tobacco farm in North Carolina, Mitchell adopted the manner of a country writer, still enamored by the big city ever since he arrived in 1929.

While Joe Mitchell’s 1942 article “Professor Sea Gull” develops the eccentric bohemian’s striving for the impossible task of an oral history of the world, his posthumous view of Gould in 1964 was a much more searing portrait, revealing Mitchell’s view that the Oral History of the World only existed in Gould’s mind.

Mitchell compared Gould’s failure to write the oral history with his own failure to write a novel on North Carolina he had written in his own mind. Despite having become the New Yorker’s foremost profile writer, he compared himself to Gould by saying, “He is me.”

According to Thomas Kunkel, Mitchell’s biographer, the death of Mitchell’s father and his close friend the New Yorker writer Joe Liebling in 1963 and the intense reporting and writing of “Joe Gould’s Secret” helped plunge Mitchell in a deep depression that made the Gould profile his last published work at the New Yorker. He went to the office for the last three decades of his life and devised several profiles that were never published.


Lepore recounts that after his second profile of Gould, Mitchell received number of letters from friends and benefactors of Joe Gould, including people who had many of Gould’s notebooks in their possession, indicating that a substantial part of the oral history may have existed. Mitchell gave his correspondents the polite brushoff, as his recently released letters archived at the New York Public Library indicate.

Despite Mitchell’s brilliant writing skills, Lepore points out that a posthumous examination of his writing has shown that Mitchell often made up composites of characters to move a story along, and invented characters when it was useful for a piece. The fact-checking rigor of the 1940’s New Yorker were also not as ironbound as those of the modern New Yorker.

One senses towards the end of Lepore’s slim volume on Joe Gould that she is exasperated and by her subject. As she takes down the legend of Gould the genial eccentric, she replaces this with a more toxic view of the man—a serial groper, a man who hounded and undermined the career of a prominent and talented sculptress and who may have destroyed Joseph Mitchell’s ability to write publishable material.

Gould’s end was grim. After a concussion, in the early 1950’s he eventually wound up at Pilgrim State Hospital on Long Island. This is where Gould’s story takes a grim turn. The director Dr. Harry Worthing was a gleeful practitioner of lobotomies from 1945 to the mid-1950’s. He published a study of 350 lobotomies performed in his hospital, a procedure often done on rebellious or violent patients. Gould may have been patient case #231.

Though she can’t confirm that Gould was lobotomized, she found a published case study of a 57-year-old man who had physically resisted shock therapy. The lobotomy made the patient more compliant and stopped his prolific letter writing.

Gould died in 1957 at Pilgrim. The director sent out a telegram, asking that his body be claimed. Mitchell, whose original profile of Gould put him on the Greenwich Village map as a bohemian eccentric, was asked to give a eulogy for Gould. He declined, saying that he was going to be out of town. e.e cummings did not attend the memorial service, and the famed editor Malcolm Cowley was a no-show, as well.

The packed service on August 23, 1957 was covered by the fledgling Village Voice. Reporter Dan Balaban wrote that the service, for Gould at the Frank E. Campbell Funeral Home on the Upper East Side was financed by Campbell and the local Village Lions Club president, a Grove Street lawyer who was one of Gould’s long-time benefactors. In his coffin, Gould was neatly arranged looking like a little wax doll, with a trimmed beard and make up covering a famous scar on his forehead. With the more famous friends of Joe Gould like William Saroyan missing, the ceremony was attended by about 80 people, including some surviving bohemians from the 1920s, younger hipsters and members of the Lions Club.

Gould was buried in Ferncliff Cemetery, in Hartsdale, N.Y. According to a Village Voice article from 2000, the grave is still unmarked.  After Gould’s funeral, the Lions Club donated $100 to start a scholarship fund under Joe Gould’s name at NYU. No trace of the scholarship today exists.

Here is the link to Jill Lepore's original article:
http://www.newyorker.com/magazine/2015/07/27/joe-goulds-teeth

Posted by Dylan Foley at 3:46 PM No comments: