The Painter Sherman Drexler, interviewed in Newark, NJ, in October 2009 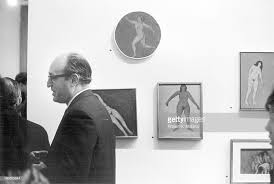 Sherman Drexler was a young painter when he started hanging out at the Cedar Tavern on University Place in Greenwich Village in the 1950's. With his good looks and easygoing manner, Drexler quickly became friends with Elaine deKooning and Franz Kline, the Abstract Expressionist painters on the cusp of art world stardom. Sherman himself remained a figurative painter.

Sherman Drexler died of cancer in Newark in 2014.

For the interview, I met Sherman in Newark, where he had moved to with Rosalyn Drexler twenty years before from their residence in Manhattan. We met over tapas. “Moving to Newark was the biggest mistake of my life,” chuckled Sherman. He was an engaging, courtly interview subject.

DYLAN FOLEY: How did you wind up hanging out at the Cedar Tavern?
SHERMAN DREXLER: We were living in Washington Heights at the time. I worked with a playwright called Don Peterson, who wrote a play “Does a Tiger Wear a Necktie?” that I think Al Pacino was in. His wife was an art critic and painter named Valerie Peterson. She introduced me to Elaine de Kooning. It was an era when everybody was open and interested in everybody else. If an art book was mentioned, you had to go get it. What happens now, the young people have no interest and little history.

I became friendly with Franz Kline and Elaine de Kooning, as well as a host of younger painters. Bud Hopkinson has became a UFO [fanatic]. He hypnotizes people he works with who claims they have been abducted.

We looked on de Kooning, Pollock and Kline as they elder wisemen. It was great to see them at a point before they exploded.

It was a macho environment.. Rosalyn had a funny encounter with a Greek artist named Aristodimos Kaldis.  He was like Zorba the Greek, a great storyteller.  He had hair growing from his nose. His shirt was always open. He liked to come on to the girls like a mad uncle. He once tried to kiss Roslyn on the lips and at the same time tried to feel her right breast. He was close enough where both things were going to happen. She turned her face and said, “You can have the breast but not the lips.” That broke everyone up, including Kaldis. Her thing was that it was the lesser evil. Kissing him, she thought., would lead to death. He didn’t wash too much. 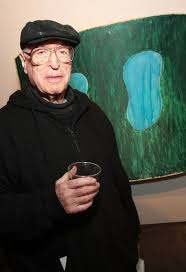 DF: Elaine de Kooning was having an affair with the gallery owner Charles Egan, who represented Willem de Kooning. Could you tell me about Elaine and his wife Betsy Egan arm wrestling?

SD:I met the wife and she was strong and tough. She and Elaine immediately became friends when their arms strained against each other.  [Betsy Egan] was sure she was going to obliterate Elaine, who was secretly in good shape, despite the drinking and smoking.

DF: Did you know the composer Morton Feldman at the Cedar Tavern?

SD: He was supersmart. He could be obnoxious. He and Philip Guston were very close, and he turned against Guston. That was unforgivable. 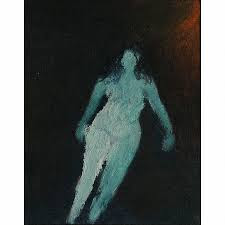 DF: How about Fielding Dawson?

SD: I like that he idolized Franz Kline. Kline was as admirable a guy as I had ever met. He once admired one of Rosalyn’s sculptures. He said, “I’m taking this. I’ll give you something of mine. He gave us one of his drawings on a telephone book page. We needed to stay in Provincetown one summer, so we sold it for 700 bucks. It paid for the whole summer. Now just for the sentiment, I wish I’d kept it.

Kline’s liver was gone The doctors said “No more hard liquor, so he switched to jugs of wine. In his mind, that is not hard liquor. He really couldn’t stop drinking. He’d been a baseball player as a kid.

Did I tell you the story about Pollock attacking him? Pollock lifted a table full of glasses and dumped it into Kline’s lap. Kline said, “Don’t do that.” Pollock said, “You want to fucking fight?” They started rolling on the floor. Pollock realized that though Kline was smaller, he was stronger. It looked like they were trying to choke each other. Pollock said, “Not so hard, Franz.”  That was told to me by Tom Hess. That I didn’t witness. It was not so hard to make Kline laugh. They put their arms around each other and went back to eating.

I knew Ruth Kligman, also. She lives on 14th Street, in Kline’s old studio. She inherited his old space. She dated Pollock, de Kooning and Kline. The best part of it was she dated Jasper Johns. People would say, “What do you mean? He’s gay.” She was just friendly with Johns, but people assumed she’d converted him. [Editor’s note: Ruth Kligman died in 2010]

There is a great photo in Rosalyn’s writing room of Kline and de Kooning staring at the back of a zaftig woman, and it was Kligman. Everyone is standing outside the Cedar Bar and studying this shapely woman.

Did you hear the Herman Cherry/Franz Kline story? The great part of the story, telling Kline how pitiful he was, Kline didn’t want him to do that poormouth thing. He said, “You owe me a fuck.” I’m not buying how pitiful you are. When Kline saw him, he said “Wipe that expression off your face. We know you are happy.”

I was working with narcotics addicts on North Brother Isalnd, next to Riker’s Island. While working there, I organized a show of student work. To make sure that people came, I got work from de Kooning, Kline and Marisol. Kline was in a bathrobe and hungover. I came to see him at 3:30 or 4pm. He started drinking. By 8pm, I was completely drunk. He was completely restored. To restore himself, he drank a little more. He came back to life.

DF: What was the change at the Cedar?

AS: It was wealth, it was growing older. When it became a total celebrity situation, there was no longer this feeling of “We are all in this together.” It was totally isolating.  Fame, money and the whole thing.

DF: Everything is connected. Rosalyn wrote the play “Home Movies,” which starred Freddy Herko. I have heard there is a documentary on Freddy Herko in the works.

SD: Freddy Herko was the sweetest. He was so gay that you couldn’t hate Freddy. He could walk into a bar in Red Hook. He was so far out, they couldn’t hate him. Jill Johnson and Freddy Hrko did a roof top dance. Under drink and drug, he’d walk the edge. His death was half suicide, half thinking he could fly.
It may have been someone saying, “Jump.”

DF: Could you tell me about Rosalyn Drexler working at Judson Poets Theatre?
SD: One story is that Rosalyn walked in and had both a cross and a Jewish star on. She was ready for any kind of religion.  Al Carmines knew immediately that they should do her play. Once Rosalyn saw the Theatre of the Absurd, like Beckett and Ionesco, she felt there was a home for her there. She had already been writing that way.

William Klein, the photographer, helped get I am the Beautiful Stranger published.

Dick Schraf and Carolee Schneemann were discussing her nude photos and nude videos. “I don’t know why men are always hitting on me,” she said. She’s an exhibitionist.

I think Carolee Schneemann is an awful painter. I think that “Meat Joy” was too easy.

I met Elaine when I was at a party with Rosalyn.  Elaine slept with a lot of people but she never tried to sleep with me. We were friends. Bill and Elaine had total admiration for each other. It was total attraction.

Elaine felt betrayed by Lee Hall’s book and her emphasis on Elaine and Lee Krasner’s competition.

DF: Did you know Allen Ginsberg?

AS: I introduced Oppenheim to Allen Ginsberg. We knew Ginsberg in California in ’55 or ’56. When Rosalyn and I lived in Berkeley, we didn’t lock the door.Allen was rapacious with young boys.  If you had a 12-year-old kid, Allen was not the guy to introduce him to.

DF: Did Rosalyn do salons  at the White Horse with Norman Mailer?
AS: They were fascinated with Rosalyn. Before she married me, she hitchhiked from Florida to New York at the age of 18. A couple of t2ruck drivers wanted to have sex with her. She got one to laugh, she got the other to talk about his mother. Their intent was to park on the side of the road and to rape her.
She had wanted to get a suntan to impress me.
Calder Willingham was a wonderful writer, though no one ever talks about him anymore. When you realize how careers are built and unbuilt, it’s just not fair.

I’ll be 85 in January.
We met in Van Courtland Park. She went to Music and Art, but was ushered out.  She cut gym and had been late too many times. The woman said, “This is the end for you. You’ll never get married or go to college.”

Years later, Mailer asked her, “How much have you lost?”
Mailer practically adopted some 17-year-old girl who was serving coffee at the Living Theatre. Mailer and Jack Gelber were interested in this girl. To free her from juvenile deliquency, Mailer adopted her. He made her box with  him. He was desperate for a sparring partner. Do you know what his last sport in life was? A writer friend of mine named Larry Shandler became close to Mailer. Mailer became a mad thumb wrestler. He had to do something competitive.

Mailer was sweet and generous, and aware of other people’s talents, then he had that crazy streak. It was a small guy wanting to be tough.

The great Bill Ward story was that Bill Ward was chatting away with another woman at a bar in Provincetown. Onlookers watched Harriet Zwerling go through the room. He’s being charming. She brings up her fist and punches him out. He never even saw it.

I always felt that Rosalyn never got enough attention. She stopped painting for a while when she got angry at the art scene, which was a big mistake because they had a big retrospective on Pop Art and they didn’t include her. All the male pop artists asked, “Why wasn’t Rosalyn included?” It’s like rewriting history, for she was part of that scene.

Brooklyn Rail is reintroducing I Am a Beautiful Stranger. They are reintroducing To Smithereens. Her novel Below the Belt failed on every level.

DF: Is it true that Rosalyn once threw her publisher across the room?

SD: He was an obnoxious guy who grabbed her and said something like “Come here, honey.” He did it to the wrong person. She worked on Lily Tomlin’s special. She got an Emmy for that.

The wrestling thing was an obsession on mine.. She was not interested, but she would take any kind of dare.
.