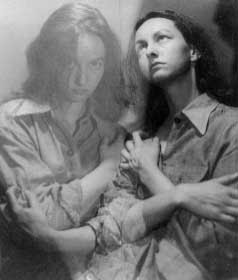 Sheri Martinelli was an exquisitely quirky painter who lived in Greenwich Village in the 1940's. She was the lover of the writer Anatole Broyard and inspired Allen Ginsberg as one of the "Three Muses" three young women who hung out in the San Remo Cafe in the 1940's, wearing granny glasses, thrift-shop dresses and doing speed. I the 1950's, she became an acolyte and probable lover of the poet Ezra Pound, who was incarcerated at the St. Elizabeth's mental hospital in Washington DC for the fascist radio broadcasts he gave in Italy during World War II. She lived in DC in the 1950's to be near Pound, then moved to San Francisco, where she was known as the Queen of the Beats. She died in 1996. --Dylan Foley

Here is Moore's introduction from 1998. It is a wonderful, beautifully researched piece about Martinelli,
No notice was taken by the press of artist-writer Sheri Martinelli's death in November 1996, unfairly ignoring the significant role she played in the cultural history of our time. A brief overview of her career indicates her range of roles: she was a protégée of Anaïs Nin and is described at length in her infamous Diary ; she was the basis for a major character in William Gaddis's novel The Recognitions and then became the muse and (some say) mistress of Ezra Pound (she appears in various guises in the later Cantos ); Charlie Parker and the members of the Modern Jazz Quartet hung out at her Greenwich Village apartment; Marlon Brando was an admirer and Rod Steiger collected her art, as did E. E. Cummings; she knew and was admired by all the Beats—Ginsberg was an especially close friend and mentions her in one of his poems—and was herself known in San Francisco in the late 1950s as the Queen of the Beats; H. D. identified with her and wrote about her in End to Torment ; Pound wrote the introduction to a book of her paintings, and her art is now in collections throughout the world. She wrote unusual prose and poetry, much of it published in her own 'zine. She was a regular correspondent with Charles Bukowski, who mentions her in a few of his poems, and was one of the first to publish his work. More recently, she appeared under a pseudonym in Anatole Broyard's posthumous memoir Kafka Was the Rage , under her own name in David Markson's novel Reader's Block , and she was anthologized in Richard Peabody's A Different Beat. When younger, she even modeled for Vogue and acted in one of Maya Deren's experimental films. And yet not a single obituary marked the passing of this remarkable woman—whom it was my honor and pleasure to have known the last dozen years of her life—and no account of her life exists anywhere.

http://www.stevenmoore.info/martinelli/smartinellimodmuse.shtml
Posted by Dylan Foley at 7:47 PM No comments: