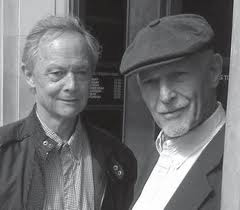 The writer Neil Derrick was raised in California. Under the pen name Bruce Elliot, he published “The Potency Clinic” and other novels. In 1970, Derrick had a brain tumor removed and lost much of his sight. With his partner Edward Field, he wrote the novel “The Villagers” in 1980. Field and Derrick have been together for 52 years.