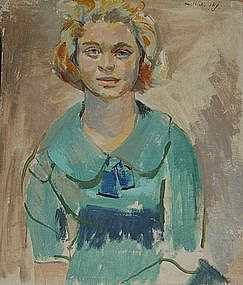 Lishinsky's "Portrait of a Young Woman"

I interviewed Saul Lishinsky in 2005, in preparation for my “Last Bohemians” photo exhibit that was shown in the Westbeth Gallery in early 2006.. Saul was 83 at the time. He tried to avoid having me come to his Westbeth apartment/studio, but I convinced him to let me do the interview there.

His studio was crammed to the brim with 60 years worth of paintings and drawings. Saul basically didn’t sell much over his six decades as an artist. He felt that his work was undervalued. At the Westbeth group shows, he would offer large canvases for more than $10,000. They would not sell.

In Saul's apartment, there was a loft packed with canvases. Under the loft was a sleeping area that was filled with junk mail and personal correspondence. Saul told me that his girlfriend had died a year before and left him her co-op, which he had sold for half a million dollars. Every surface was covered in brushes, tubes of paint, clothes and paper. There was a large, long-unused printing press. There was only one empty chair. Saul insisted that I interview him from the chair and he would stand.

In late 2007 or 2008, Saul was losing the ability to take care of himself. His nephew had him moved to a nursing home and hired someone to clean out his studio. Hundreds of paintings and drawings wound up at the Chelsea Flea Market, held in the garage on 25th Street.

In 2008, I found a very thoughtful blog called “Horses Think,” where the writer said that he he’d bought a large oil painting of Saul’s that March, and said that the paintings were going for $40 to $400.


My friend Jack Dowling is a writer and painter who has run the Westbeth gallery for a long time. He curated two shows by Saul Lishinsky, and had tried to convince Saul to set his prices lower. Saul said the paintings should go for the price of a new car.

Jack wrote in to the “Horses Think” blog that Saul “is in a nursing home and whether he knows what has happened to his life’s work or not, I have no idea. I am just happy to know that his work is out there being purchased and hung and appreciated for, perhaps, the first time in his life.”
Tooling around the internet, I have found the an oil painting by Saul of a female nude from 1950 selling for $2000. A less impressive satirical painting is for sale by another gallery for $400.

My short interview with Saul is one of the most popular pages on my “Last Bohemians” blog, most likely viewed by people who have bought Saul’s art or have admired his paintings.

Saul is still alive in a nursing home in New York City, contrary to the errors on some of the auction websites that say that he died in 2006. He must be about 89 by now.